RS 470 is the latest innovation from TenPoint, which is now the fastest rig on the market.

The Tenpoint model was introduced to replace the TenPoint XRT from 2019 and generates blistering speed up to 470 FPS feet per second. It is one of the fastest crossbows in 2020. Another amazing feature is its game-changing new cocking and de-cocking system.

Add in a new, fluted flight rail, two-stage trigger, reverse draw bow technology, and a host of additional high-end traits. This is an excellent hunting companion packed with the kind of quality, performance, and power.

Below are the brief description and specifications of Tenpoint Vapor RS470 Crossbow. In this Crossbow review, we covered up features, pros & cons, power, built quality, accuracy, and included accessories. 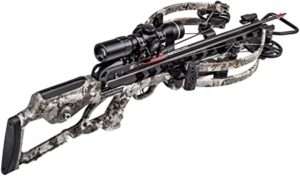 When it comes to crossbow, speed is the first thing that every hunter wants. It can send arrows downrange at mind-boggling 470 feet per second. Rs470 generates supercharged speeds up to 470 FPS and is equipped with the new silent cocking and safe decocking system.

The bow features a combination of several technologies that work together to maximize performance. It comes with RX-7 cams that rotate an industry-leading 404° during the draw cycle. It raises the amount of energy stored in the system and offers a “turbo boost” of speed upon launch with Sling Shot technology.

Its velocity also increases with its 17 inches power stroke and reverse draw configuration that points the Dual Flex limbs away from the shooter than toward the shooter.

It positions the cams and string at the far end of the rail that allows for the string to be drawn a greater distance from its resting position to the trigger housing, therefore increasing the flex in the bow limbs and the amount of energy stored.

The 20-inch Micro Track aluminum flight rail is fluted to decrease its surface area by 50% compared to a standard flight rail. It reduces energy-robbing friction during string release and enhances string life.

With Vector Quad cables, it eliminates accuracy robbing cam lean by anchoring one cable to the top of each cam and another at the bottom.

This Tenpoint Vapor RS470 crossbow also shines in the area of safety via the unique new revolutionary ACUslide silent cocking mechanism. It silently cocks and de-cocks the string with a high-strength ratchet strap attached to the rear of the trigger box.

Also, it offers safety in the form of DFI (dry fire inhibitor), which prevents the crossbow from being fired without a properly loaded arrow. Furthermore, the auto engaging trigger safety, and a pass-through foregrip allow for safe placement of the front hand below the flight rail. It has glass-reinforced nylon safety wings that keep finger safely below the bowstring’s path.

The reverse draw crossbow is one of the most balanced and smooth shooting crossbows. The limb openings are positioned towards the center of the bow. It reduces the weight out in front and makes the crossbow comfortable to shoulder.

It comes with 3.5 pound, 2-stage S1 trigger, zero creep trigger that features a roller sear system. When you pull the trigger, it offers you a nice, crisp feel. This sear system sets a new standard in high-performance crossbow accuracy.

This entire mechanism is built on a foolproof five-piece system, and it is truly a pleasure to shoot. Its stainless steel latch locks the trigger at full draw and relieves the tension from the ACUslide and leads to 48% increased accuracy.

Another advanced feature is the new Micro Barrel. It has two separate tracks that are outer track and inner track recessed below the outside of the rail. This allows the arrow to rest cleanly on the inner track without having the string come into contact with it.

It reduces the amount of string to rail contact by 50% that reduces friction and increases string life.

For this fast crossbow, the sound of the shot is surprisingly minimal. The shot noise on the RS470 is relatively modest and produces tremendous speed. It is integrated with a string stop system at the front of the unit. This system cancels noise and vibration after release.

Ease Of Use and Assembly

Also, the balance point of this bow is just forward of the trigger that makes it easy to shoot-off hand without having to fight all the extra weight found in the front end of conventional design.

It weighs 8 pounds without crossbow accessories. The weight isn’t much of an issue on the range and wouldn’t be on short hunts. But consideration on longer forays in and out of the backcountry.

This Tenpoint Vapor RS470 is available as a complete package that includes everything you want to take this crossbow from the shipping box to the shooting range to the treestand or blind.

In the package, it includes the EVO-X Marksman Scope. This scope provides a clear view of the target and features a reticle with dead-on aiming points for 20 to 80 yards. It is calibrated for 10-yard increments.

This Tenpoint Vapor RS470 comes pre-installed and sighted from the factory and needed only small adjustments to dial into the center of the bull’s-eye. The scope is mounted on a machined aluminum 7/8-inch Fixed Dovetail Mount. The accuracy is also excellent as it enables you to achieve half-inch groups while shooting off-hand at 25 yards. The scope is outfitted with quick-detach scope rings, and high-quality flip-up scope caps.

The cocking and decocking system from TenPoint is one of the most advanced innovations in crossbow manufacturing. Its ACUslide utilizes internal brakes that prevent dry firing during cocking.

Its brake unit prevents the handle from moving and unwinding. The Nylon Strap that connects to the trigger box has a load capacity of 1600 pounds. It has the integrated roller in the barrel, which act as bearing allowing for a super smooth cocking and decocking process.

Instead of holding all the pressure on the nylon strap, it has Trigger-Lock Latch. It is made of SS and assures that your trigger box is set in the exact same space. The trigger lock latch can improve accuracy.

The package includes a New compact Tech quiver. It contains a rigid ultra-durable spine and is designed for easy ambidextrous mounting. Its gripper can hold up to four arrows with broadheads or field points. Moreover, included CenterPunch 20 inch arrow is the most accurate one. It is fletched slightly offset and is fitted with an 84-grain insert.

Overall this Vapro RS470 is an excellent crossbow that offers impressive speed, power, and accuracy. This TenPoint Vapor RS470 crossbow is designed built and tested in the USA. It comes with lots of exciting features that you definitely love. You can safely cock and decock thanks to the ACUslide crank.

1. What is the advantage of Reverse Draw?

It helps to generate more speed with less draw weight. Its elongated power stroke raises the distance and the bolt nock is engaged with the string. Moreover, it makes the crossbow more compact.

2. What is the purpose of Tec-X Stock?

It minimizes the stock size and reduces the weight of the crossbow by 1/2 pound.

3. What is the effective range of the bow?

For target shooting, the reticle in the scope enables you to shoot out at 80 yards. For hunting, it is recommended to shoot at a 50-yard maximum.