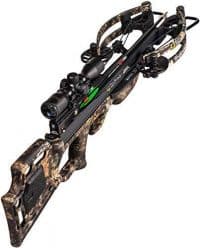 For around $1000, Shadow NXT is the narrowest and most accurate crossbow on the market for the money.

The TenPoint Shadow NXT provides you with more shot opportunities in tight shooting fields, so you don’t miss the shot of a lifetime. This is tack-driving crossbow that crushes any similarly priced crossbow. It delivers tremendous dependability, speed, and accuracy.

Fit and finish on the TenPoint NXT crossbow is like to that of any TenPoint offering, and it is hard to imagine a better fit and finish on any crossbow.
380 feet per second is far and away fast enough to kill any medium to the big sized game in North America from out of 80+ yards, making this an excellent long-range crossbow.

In this review, we covered up features, pros & cons, power, built quality, accuracy, and included accessories. 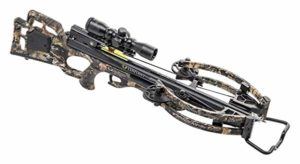 This crossbow is a 7 pound that measures 32” in length and a mere 6.5 inches wide axle-to-axle when cocked. This does wonder for the crossbow’s maneuverability whether carrying it through the woods or shooting it from the ground blinds and tree stands. It is built with an optimal downward string pressure that reduces the string-friction and allows it to last up to 75%.

It comes with Narrow Crossbow Technology (NXT). Although it is similar in looks to Ravin’s Helicoil, its working is different from Ravin. The NXT’s four Vector-Quad come off the large cams where they are routed around two frame-mounted turnbuckles that turn them about 120 degrees towards metal limb pockets.

It eliminates the need for the cables to pass through the frame, that increase cable life by reducing friction. It also reduces the downward torque induced on the cables.

This crossbow features a carbon infused polymer barrel. The design of the bow allows the limbs to be arranged in a way past parallel, and narrow configuration that greatly decreases the crossbow’s width.

It has Drop-Tested stock that is two times stronger than competitor’s ABS stocks. The stock is infused with fiberglass and touted to be more rigid than plain polymer.

It has a T5 trigger that is designed for hunting. This auto safety trigger features a consistent, crisp break. It is the smoothest and one of the safest triggers on the market. Ambidextrous feature in it enables both left-handed and right-handed shooters.

It delivers a 4 pound, smooth, crisp trigger pull for increased accuracy with an optimum creep for safety.

It features ergonomic foregrip and rubber safety wings. It is designed to keep the shooter’s fore-grip hand and fingers safely below the bowstring release path.

The Shadow crossbow has an auto engaging safety/Dry-Fire inhibitor. It prevents dry firing the crossbow when not loaded. It also minimizes the potential to the bow and the user.

The TenPoint NXT is easy to assemble. This TenPoint crossbow takes less than 15 minutes to assemble. Attach the foot stirrup, snap the crank in place, mount the scope, and you are done.

The package includes the TenPoint Pro Elite 20 inch carbon arrow that is fletched slightly offset. These arrows are fitted with a 68-grain brass insert, 3.5-inch Bohning X Vanes and TenPoint’s New Alpha-Nock and receiver for quick lighted nock installation. Pro Elite shafts are examined for straightness to within .003 and hand-sorted for weight tolerance to within 2-grains per dozen.

It comes with patented Omni-Nock. Its unique six groove design eliminates the indexing problem of the moon and capture nocks.

This crossbow is pre-installed with TenPoint’s Integrated Sound Dampening System which dramatically reduces noise & vibration. This SDS features micro-adjustable dampening rods with durable, high impact rubber dampeners. It is mounted in the cable slot of the bow to reduce string noise and oscillation.

ACUdraw 50 SLED is fully integrated into the buttstock. Its cord retracts neatly inside the unit’s housing after cocking. It is lightweight and contoured covers provide improved security of the weapon.

The Shadow NXT is a great choice for hunters and archers looking for a compact crossbow that will drive tacks and last for years to come. It is equipped with high quality accessories. Its lightweight and compact design offers excellent maneuverability

With amazing arrow speed, easy handling, and durable construction, you will get more out of this crossbow than you’ll expect.

1. How often should you change the crossbow’s strings or cables?

At a minimum, you should change your string/cables every other hunting seasons. If you shoot your bow often throughout the year, you may consider changing each season.

2. What is the draw weight on the rope sled model?

This NXT crossbow is around a 200-pound draw, so with the rope sled, you would be putting 100-pound draw.

Both the Ravin R10 and Shadow NXT are excellent choices for hunters. In terms of performance, both crossbows are similar on paper with the Ravin R10 pulling slightly ahead in a few categories such as kinetic energy, speed, and axle-to-axle width. Both bow models come as package options from the manufacturer and are provided with high quality elements. Something worth noting is that R10 is equipped with three additional bolts compared to the TenPoint model.

4. How compact is Shadow NXT crossbow?

It is the most compact crossbow, measuring only 6.5 ” axle to axle when cocked. This makes it great crossbow for shooting in a tree-stand or from behind a blind.

5. How much does this crossbow weigh?

This crossbow weighs 7 pounds that are slightly below average in terms of weight for a compound crossbow. It is recommended that a crossbow that weighs 7 pounds or less are suitable for beginner hunters.