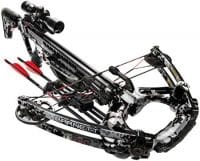 Are you searching for a crossbow that offers a nice balance between power and usability? This crossbow may be the best one for you. It comes in digital grey camo that is appealing to the eye. This TS390 Tactical Crossbow has innovative incorporation enabling a self-adjusting soft-low bristle arrow retainer.

It provides great power and performance that are two important assets for any hunter who wants to bring down the prey of a large size. Moreover, it is equipped with various extras aimed at making you an even better hunter and developing plenty of kinetic energy and high velocity.

User-friendly and smooth without sacrificing effectivity, this Barnett TS390 Crossbow is worth noting. The device can do this without requiring to strain hunter arm every time you cock it.

In this review, we covered up features, pros & cons, build quality, power, accuracy, and included accessories. 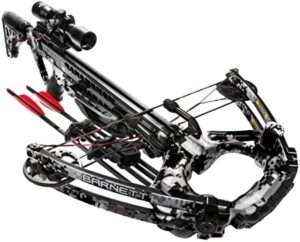 This tactical series model has the good build quality and design. It is another proof of the dedication of the company has for excellent craftmanship and robustness. The step-through riser is built from fiberglass composite to assure that for the performance offered is still comfortable to manipulate.

TS390 proves that it is more than meets the eye. Besides speed, it also develops 128-ft lbs kinetic energy and power stroke around 14.25″. It is manageable and easy to use. From axle-to-axle, when cocked, it has a bit over 16″ that makes it the best pick for hunting using a tree stand or a blind.

Without a doubt, this TS390 is a practical crossbow with excellent usability. It allows itself to be operated quickly and efficiently in the field. Also, it’s quite while reloading, cocking, and firing. It entails string dampeners, which enhances stealth-like shooting.

Its aim is very precise, making this an amazing bow for large and medium prey hunting.

It features an adjustable ventilated stock, CNC aluminum track, and a Step-Through Riser to produce a fast-handling package. Its design moves the foot stirrup into the riser assembly. It eliminates the extra bulk and length, while also makes the bow more comfortable to shoulder. Also, it is easier to steady with its balance point shifted slightly to the rear.

The Riser design allows for two additional inches draw length, which results in increased speed and power without the need to widen or lengthen its limbs. It has an adjustable buttstock that assists with tailoring its fit to individual shooters. At 19″ wide, this bow is narrowest crossbows.

It has an exclusive capability of producing much speed and force. It shoots an arrow at a maximum velocity of 390 fps. The more speed a broadhead contains in it, the quicker it can hit the target like a speedy rocket.

Its Frictionless Release Technology features a free-floating roller between the sear and the trigger. It makes the trigger smoother, lighter, unlike anything you’ve ever felt before. The nock sensor minimizes dry fires and offers full safety.

A crossbow can be a reason for your success in hunting, and at the same time, it can be a cause of your minor or severe injury. There is no value of such a crossbow that offers you all the qualities for hunting without providing safety.

This Barnett crossbow comes with ultimate safety features along with hunting ones.

The only thing you don’t want to happen when you shoot is the crossbow string that starts vibrating once you released the bolt. That’s why a good quality crossbow comes with some silencing system in place. The TS390 has string dampeners that eliminate noise and vibration.

It comes almost assembled, requiring little time to assemble fully. There is a single bolt stands between you and your crossbow being field ready. Therefore you can spend less time inside flipping through an assembly manual and more time outdoors doing what you love.

Apart from the crossbow itself, the package includes various accessories that’ll help you bring your game to the field.

The 4x32mm scope has a 5-point programmed multi-reticle crosshair system for quick target acquisition at various ranges. It is 8″ long by 2″ wide and fits nicely into most cases, even when mounted to the bow. Moreover, it comes with red/green illumination for low light shots, easy to sight in, and can be used without illumination.

The scope is multi-coated and provides excellent resistance to glare and reflection. Its multi-reticle design allows for comfortable shooting at 25, 35, 40, 45 and 50 yards. It is waterproof but isn’t the best to use in cold temperatures, and the lens tends to the fog that makes seeing anything quite tricky.

This rope cocker helps you shoot with greater levels of accuracy by reducing the poundage pull by half for easy loading and unloading. The T-handles on it easy to generate a higher amount of pull. So you can experience less strain while also saves fingertips from getting pinched.

It is equipped with brass cord rollers to deliver a fluid drawing action for optimal functionality. Moreover, it offers an easier way to focus on precision instead of draw weight. Or, if you prefer other means of cocking, simply remove the cheek piece and install a crank cocking device.

It comes with two 20″ headhunter arrows that are of decent quality. These are ready to shoot right out of the box and provides a superior level of penetration. The shafts are constructed from carbon and feature moon nock. These arrows fly sure and straight.

It also includes side-mount quiver that can easily be mounted. It is lightweight and ambidextrous fit.

The Barnett Tactical Series crossbow is an excellent choice for beginners, as well as for seasoned hunters. It can shoot a bolt at a top velocity of 390 feet per second and provides plenty of extras that’ll make your life as a hunter is easier. It is possibly one of the best Barnett Crossbows. After going through this review, you’ll no doubt in your mind about the accuracy and power of this crossbow.

The package includes two 20 inch arrows, and it is compatible with 20″ and 22″ arrows.

2. Is TS390 Tactical crossbow Is Good For Hunting?

It is an affordable and high-quality crossbow in the market preferred for every type of hunting. At 390 fps, it is faster enough to nock down any game. It provides noiseless operation that is more convenient to kill deer. It is suitable for both novice and experienced hunters.