Crossbows are awesome hunting weapons that have the advantage of not holding the bowstring after you’ve cocked it. Back in the day hunting form an integral part of that life and most hunters used archery equipment for hunting. While there are various modern and new crossbows available that you can use, in the end, it still boils downs to two – the recurve and compound crossbows.

So your next step is deciding whether you should buy a recurve or compound crossbow.

Both compound and recurve crossbows, like their counterparts in traditional bows, have their advantages and disadvantages. Let’s look into each of these types of crossbows, how they work, and what are their benefits. 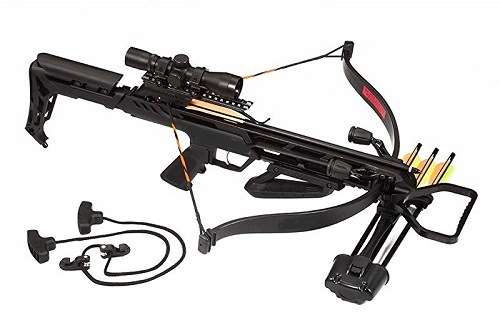 Recurve crossbow has a simpler design than the compound crossbow as it has no cams or cables to make it complex. Crossbows with recurve limbs must have longer limbs and a longer barrel to provide the longer power stroke to the crossbow bolt. Most of the hunters choose the recurve crossbow because of its simplicity.

Recurve crossbows are known as recurve because the tips of the limbs curve away from the shooter to provide power while shooting.
These crossbows are wider than a compound crossbow.

The compound crossbow is often described as the modern crossbow where the limbs are generally much sturdier. It uses cams and cables to produce more power and great speed to the bow arrows.

Its limbs are smaller, and the barrel is shorter as it doesn’t rely on the limbs make most of its power. However, it is noisier than the recurve crossbow when fired. The reloading speed on this crossbow is faster because of its more compact size. 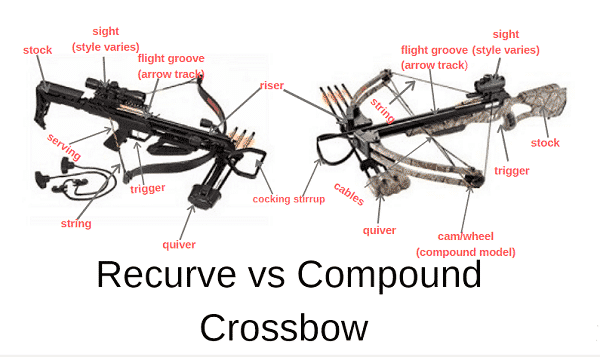 In bow hunting, accuracy is very important. You want a crossbow that puts the bolt exactly where your sight says it will shot after shot.

Durability is a toss-up between the styles of recurve vs compound crossbow. On the one hand, recurve crossbow exert more strain on the bowstring as it’s less efficient at storing all that stress. This means that the string will need to replaced more often. However, compound crossbows have more moving parts, that means there’s more point of failure.

Which is Right Crossbow for Hunting?

To be fair, it depends on the type that best suits your preferences. If you’ve been bowhunting for a few years and would like something quieter & more stopping power, then a compound crossbow may be more suitable for you.

If you’re new to the sport, looking for a crossbow for a small game, recurve crossbow is probably the right choice for you as it comes with a lower price tag and less complicated maintenance.